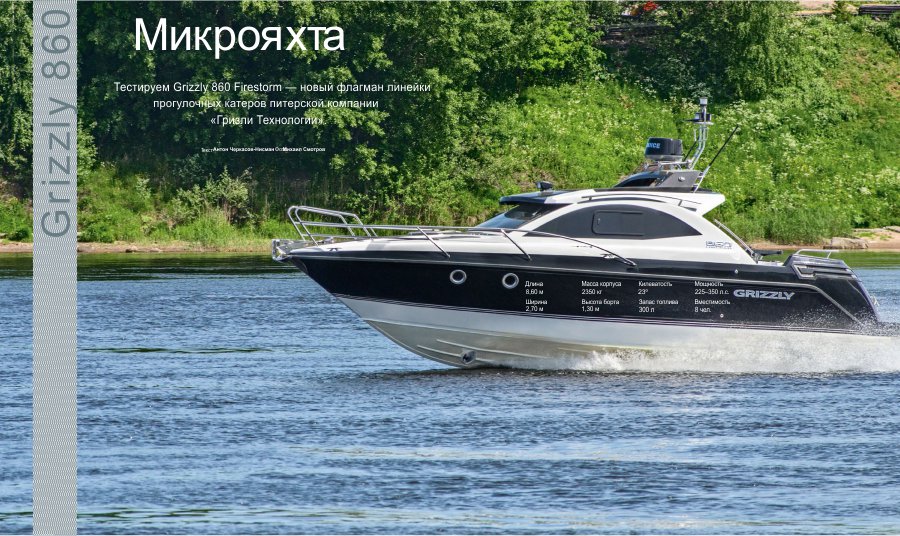 Two years ago during the exhibition SPIBS 2014 our familiarity with Grizzly 860 has happened. We just have tested another modification – Grizzly 820 with outboard motor Mercury Verado SCi (Racing) of 350 hp (read the article “Thunder and Lightening” in MBY #1/31, 2015). Since that time “Grizzly Technologies” has faced with an interest of potential purchasers to the same model but with stationary diesel engine. First of all it has been a demand from south regions, namely from the Volga region, where people go on boat for a long distance and have a need in speedsters. In such way Grizlly 860 Firestorm was born – a new flagship, even more comfortable for family rest on water.
Design and habitabilityI wouldn’t repeat a description of the boat and stop only at the new details and principal moments that differ Grizzly 860 from the other numerous representatives of this boat type. First of all it’s a nice exterior that distinguishes the boat among similar Russian and foreign products. Well-welded and painted hull of aluminum alloy is endowed with a pretty, accurately melded bulkhead made of fiberglass. Together they make an impression of reduced copy of English or Italian 50-foot racing yacht. This effect is achieved also thanks to low fiberglass radar arch with a frame of chrome pipes, wide (1.50 x 0.60 m) sunroof and specific glazing. Here we can add numerous decorative elements with carbon imitation (carbon is used as an outer layer during their melding), artificial tick and decorative hole of air intakes taken away by metal grids. I like an engineering idea of entering a railing to Grizzly 860 design: you have something to seize and simultaneously these “pipes” don’t spoil the exterior of the boat.

The shipyard deserves a special compliment for a successful glazing. Firstly, the entire aft bulkhead of the deckhouse including sliding door is made of blacked-out glass. Secondly, the bow of the vessel has two large light “windows” of triangular shape and a large round hatch (emergency exit). Finally, there are four small opening illuminators in the hull (there is no one on the Grizzly 820). All these fill the interior space with a light and allow you to adjust the ventilation in the hot day. The only thing you can find fault with is the quality of blacked-out glasses made of usual dark film. During the bright sun the objects in the cabin are reflected in the illuminators and on the strip at the top of windshield that can disturb a helmsman. The simple solution of the problem is to use a glass with factory and slightly less dense toning: the design is not affected and from a practical point of view it would be much better.
Another feature of the Grizzly 860 is a multi-level deck. It takes some time for feet to remember all the steps in the cabin, but then on the boat you can move comfortably – ceiling height is 1.95 m almost everywhere. Together with a massive bed in the bow (2,10 × 1,90 m), it should appeal to a large people for whom the search of small convenient boat is often  problematic.
On the waterOn the test version of Grizzly  860 diesel Volvo Penta D4 (225 hp) with transom column DPH is installed. The motor is hidden under the deck of the cockpit and right up to it (closer to the midship) fuel tank of stainless steel is attached. This leads to almost optimal balancing: trim to the stern of the equipped boat in the rest doesn’t exceed 3 °. The shipyard has used a nonstandard way and has made the engine compartment extra-compact: batteries and other equipment which is usually mounted close to the engine is placed in the lockers along the sides. Checking the filters and engine oil level is not difficult, but the service access to them is difficult.
The test of the boat has taken place in Neva River. A powerful bow thruster has helped us to leave safely a mooring place despite the strong current of the river, and the captain has given full stroke. Electronics has taken a few seconds to understand the command and diesel slowly has begun to gather momentum. When at the grade of 2000 rev / min a turbine “has woken up” the boat with three passengers on board has cheered noticeably up. Coming to the gliding (without transom plates) at a speed of 13-14 knots this boat as the boat with outboards has met significant resistance bulge but rather quickly has returned to normal trim of 4 °. Within 25 seconds the hull has glided vigorously and by the 40th second, we have reached the maximum speed; its averaged value on two tacks has been 32 knots (3500 rev / min).
A long-standing disputeOn the pages of MBY we have repeatedly talked about pros and cons of the outboard and inboard motors on the boats of such a type and we can now go back to this question.  What to choose: outboard petrol Mercury Verado 350 hp or diesel Volvo Penta D4-225 / DPH? The first one gives a speed of 40 knots and is 40% cheaper, but the second one is considerably more economical. With fuel consumption of about 46 l / h at maximum capacity 3500 rev / min power reserve is 210 miles. At the same speed of 32 knots Mercury Verado 350 consumes 62 l / h, and power reserve reaches only 150 miles (excluding reserves). Of course, if you hang  Mercury Verado with power of 225 hp to the transom, the fuel consumption may be comparable, but it is not known whether the speed will be equal: the high efficiency of motor-tandem of transom columns DPH is well known.
Against the obvious advantages of outboards are still two weighty arguments in favor of a stationary diesel engine. First of all it’s reliability: Volvo Penta D4-225 is one of the most trouble-free models of the Swedish manufacturer. According to Russian service dealers if something is happened with these engines, it is only because of operational errors. And there is one patrol boat D4-225 in which this engine has worked flawlessly 6000 hours before overhaul.

The second argument is practical. The fact is that  Grizzly 860 has been created primarily for family holidays and it is perceived as a compact sports cruiser. In this case, the presence of a wide and most importantly free aft platform (which you don’t have with the outboard motor) is for many the decisive factor. Against the background of these two advantages the higher cost of the stationary engine does not look like serious drawback.
– Grizzly 860 in any modification is made first of all for family rest.
– Carbon steering console contains a part of devices, all the rest are on the board under right arm of helmsman.
– The chair near the console is not regulated but it is quite comfortable.
– 32 knots This speed was achieved by Grizzly 860 during the test with diesel Volvo Penta D4-225/DH.
– A large sunroof in the superstructure gives light and air to the room.
– Dinetta on the test boat is not transformed into a bed: the owner has a house near the water, and overnight on board is not required.
– Anchor with electric capstan in the bow is the “base”; there is plenty of room for the second anchor on transom platform (optional).
– The engine compartment cover rises together with the stern locker and table thanks to gas dampers.

– Grizzly 860 in maneuver. Large transom platform is equipped with the ladder and the compartment for mooring.