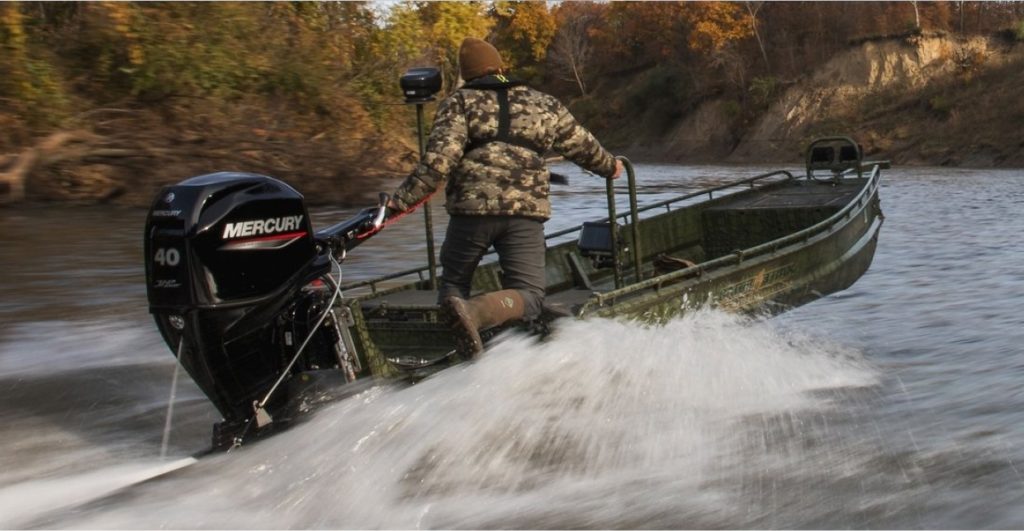 Water jet outboard motors are traditionally in short supply in Russia. If to talk about Mercury, in official supply there were only two models – of 20 and 40 hp. Nowadays these two-cycle motors discontinue the line, and  can be bought only on demand. Besides not wide range of Russian companies develop this theme at their own risk, exchanging underwater part of traditional motors with screw propeller into foreign  water jet attachments.
Meanwhile, as far as can be judged by the reader’s appeals to “cue” the demand is quite large – especially in Siberia and the Far East, abundant shallow waters. Mostly in these regions and aimed a new model of «Mercury» – the first in a series of fresh water jet outboard motor company, designed to replace the outdated two-stroke.

Providing the engine with water jet “foot” on the test, the Moscow office of «Marine Power Europe» we were warned that the sample – at that time we had in the capital and in Russia in general in a single copy – the pilot and that before the start of serial production and public supplies its structure can be a number of changes on the results of consumer testing. Their wishes on behalf of the Russian vodnomotornikov were invited and us.

From “legs” grow
International cooperation and close cooperation even competing companies at first glance – in the global motor-field for a long time everyday business. It is no secret that the new product in 2006 – «Mercury 25 EFI» with a conventional propeller, on the basis of which the water cannon was developed on the basis of a modification -Create «Tohatsu» vpryskovyh four-stroke engine and differs from it in the first place due to their design, made in fashionable style «Verado “as well as combined gas-operated thrust reverser. Rotating in both directions tiller handle carries two functions here, as in the popular “tag” and the Japanese prototype switch from “neutral” on the front or the back up is carried out a separate handle.

It is such a simple reverse control scheme and prefer water jet version of the creators – the handle to the right along the hood sides motion na¬pryamuyu connected with thrust reversing valve that redirects the flow of water from the nozzle. Lock the tilt motor astern also includes a separate lever, located at the front of the tray. In principle, it is normal, because the main problem of this scheme can be shown only on the traditional propeller outboards if forgetfulness does not release the lock when the forward gear, the engine simply toss on encountering an underwater obstacle – with all its consequences. On the water cannon is virtually not protrude beyond the bottom of the boat, this possibility is difficult to imagine even theoretically. Not integrated and rapid rearrangement of the engine in the intermediate positions otkidki generally used in shallow water – on the water cannon is simply useless, and choose the best way to trim (which is water-jet boat usually adjusted once and for all), and can be in the old, permutation hard checks in suspension holes.

In general, the creators of “jet” perfectly reasonable not have to carry it a number of “bells and whistles” of the prototype – when the urgent need for them not no sense in a more complex and expensive engineering solutions.

The very water-jet, replacing traditional underwater part with a gearbox and propeller, made for the most popular on the outboards centrifugal circuit – impeller rotating within a horizontal “shells”, planted directly on the vertical Dade vudny shaft, eliminating the need to further the gear transmission. The protective grille with a 15-mm gap between the ribs integrally molded with the housing part of the receiving conduit, if necessary, it is easy to remove by removing the six bolts from the flange to which it is attached to the “shell”. When upright grille motor is at a slight reverse slope to the water’s surface, creating additional backwater for front reverse.

Experimental outboards was set at 4.9-meter aluminum boat «Karib 500″ Brazilian production provided by the Moscow company “AkvaDrayv”. «Mercury Marine» the official distributor. In our opinion, this boat for the 25-strong chetyrehtaktnika was clearly legkovat and narrowish (100 kg and 1.4 m at 4.9 m in length), and water jet with its native setting except that the material body, able to “punch” in the shallows. Standard transom designed for short “leg” outboards, had to be extended up to 510 mm, but in order to accurately adjust the front edge of the receiving array jet to the lower edge of the transom, under the clamp planted a wooden block. Incidentally, since the motor is heavy and large (if you focus on the more familiar to Russians duple-cycle, it is easy to take for “sorokovke”), in addition to the usual hand-tightening the clamp on a number of holes, allowing it securely passed through the transom with additional bolts. Too sensible decision – given the weight of this engine more “seasonal” installation, and remove it from the boat after each return to the coast is unlikely that anyone will.

Surely but slowly
Test runs were carried out on the Moscow River near Tushino in the autumn chill (6 ° C) at a wind speed of 3-4 m / s and a load of 3 people.
The first attempt to pull the starter rope failed. As expected, the engine is equipped with a lock from the start on the front or reverse the course, but that’s only “neutral”, liberating the trigger, it had to “search” – more or less clear fixation, accompanied by an audible click, have only the extreme positions of the handle. Place it somewhere in the middle, we have started the engine. At the time of starting jerk on the front panel blinking red LED and a short beep heard – here, as in “adult”, there is a light and sound alarm low oil pressure, overheating and “twisting”. By the way, «Mercury 25 EFI», as well as its Japanese prototype marks a new stage in the development vpryskovyh engines. Now the battery is not required for the electronic “brains” and the injector – generator power enough even when you scroll manually, which can be used to inject the most simple tiller versions (although, of course, there are more expensive versions with electric starter, remote control and gidrootkidkoy). The only pull the cord when you start to be more energetic.

Alas, but the lack of fixation “neutral” impact, and after the launch. As soon as we add a little gas as the boat itself slowly rolled astern – the water pressure from the nozzle pushed reversing valve in the reverse position. If not for this unfortunate feature “neutral” can be considered successful – flap in this position cuts the water flow exactly in half, and the boat with the engine running and the rotating impeller obediently stands still.

After switching on the forward gear, we were waiting for “cannon” of acceleration and exorbitant to light the Brazilian “dyuralki” speeds, but dispersal was quite a power. Immediately after planing heard loud exhaust tarahtenie – though the outlet pipe and bred in the jet nozzle, which is washed by water jet, this, apparently, is still not enough for an effective sound attenuation. However, this disadvantage is typical for the vast majority of suspended water cannons, because the course is slightly submerged in water only receiving grating, all the rest – in the open air. The maximum speed is also not warmed sporting ambitions. By transplanting both passengers closer to the driver and increase the trim aft, causing the decrease in wetted surface of the hull on plane, managed to add a couple of kilometers per hour, but still the result should be recognized quite modest – no more than 36 km / h. It seems that if you use the classic outboards propeller on a boat easy to achieve the same period we have quite enough power on the order of 15 hp

A possible explanation we got by connecting to the motor external electronic tachometer «Stihl» – is on full throttle engine speed was only 4050 rev / min (by the way, turns on the water jets are not dependent on the load – that’s our «Mercury 25 Jet» with apothecary gave up the same number that on the line in the planing mode, when the rotation of the boat on the spot). Maybe water cannon console was too “heavy” for the motor, which did not allow him to spin up workers 5600-6000 rev / min and thus reinforce the provisions of the power? Probably, at that time it was for the better, or too fast driving could be simply unsafe.

And then with a light, narrow and clearly sporting character of the open boat could get up to anything that your heart desires, helped albeit slow, but steady, energetic engine. With the frequent occurrence of water jets as air grab, we did not encounter never-even during sharp turns. Very confidently steer the boat and go back – only, it should be remembered that the speed limiter in this mode is not provided. And, of course, is itself water-jet drive gave a delightful sense of permissiveness, which rarely feel in those places where stray from the marked channel is not recommended. Water jet, of course, is not a complete panacea for shallow water – for example, damage to the impeller at high speed is able to suck in the water line pebble, but the stone that we have learned from the receiving array after lifting the boat to shore, testified that surely there were others, smaller, that “the Mercury 25, the Jet” successfully “digested” and spat.

Summary
The transition from two to four cycles and from the carburetor to the injection – sign of the times, and the process can not be stopped. If someone from the Compatriots are not yet concerned with environmental regulations (which in our country, however, even with a lag, but catching up to the European), the next important argument is fuel efficiency of the new generation of engines that offers the most visible “money “effect precisely on outboards small and medium power. The increased size and weight is perhaps not such a serious charge for new benefits. In general, the idea lead to the modern denominator and a specific sector of the market outboard engines as water cannons, can only be welcomed. This technique is always in demand, and in a number of “shallow” areas only because it can be operated and small vessels (of course, subject to certain simple rules). We tested a sample, as already mentioned, was experimental, so there is every reason to hope that before the start of official shipments in its design will make some changes – in particular, will lead to the engine speed rate, allowing to implement it fully cardinality opportunities and will provide system Reversing switch more intelligible lock “neutral.”