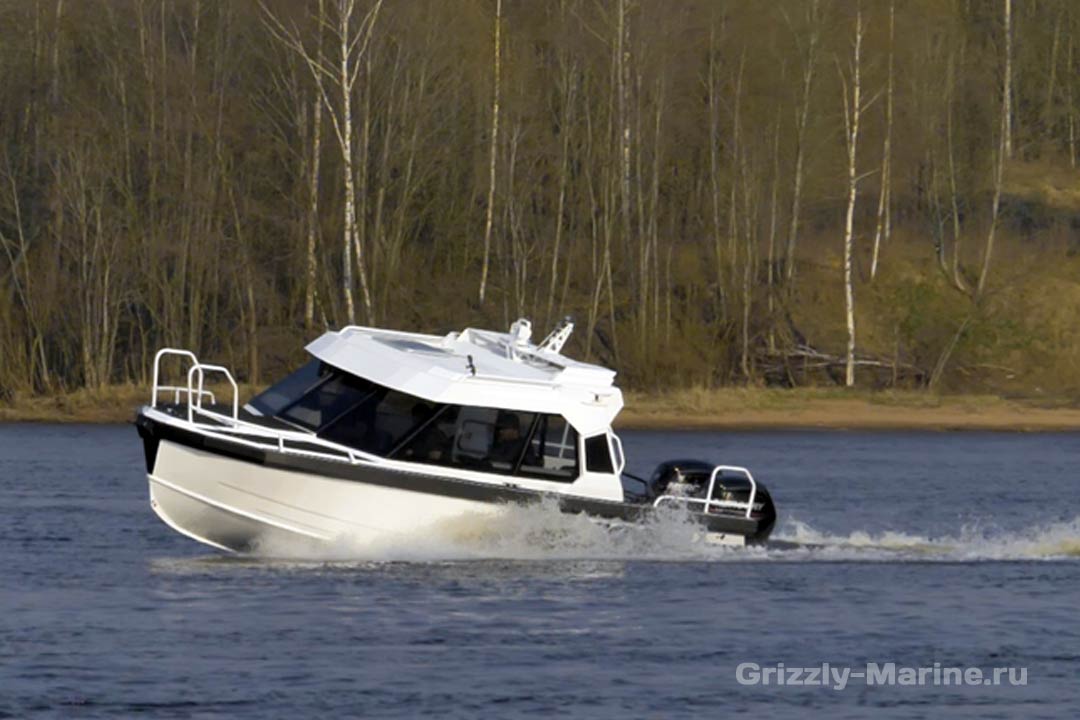 The new GRIZZLY G680 PRO TWIN Cruiser takes its proper place in the Grizzly range and seriously competes with older boats, thanks to its good habitability, seaworthiness, and operating comfort. The boat will appeal to serious anglers and those who like to travel far from civilisation, or for special purposes, professional coastal services and agencies.
The boat has a twin outboard installed on the transom and this is one of the main features of this model, which also reveals the presence of the word twin, in the boat’s name. Which means twin propulsion system. 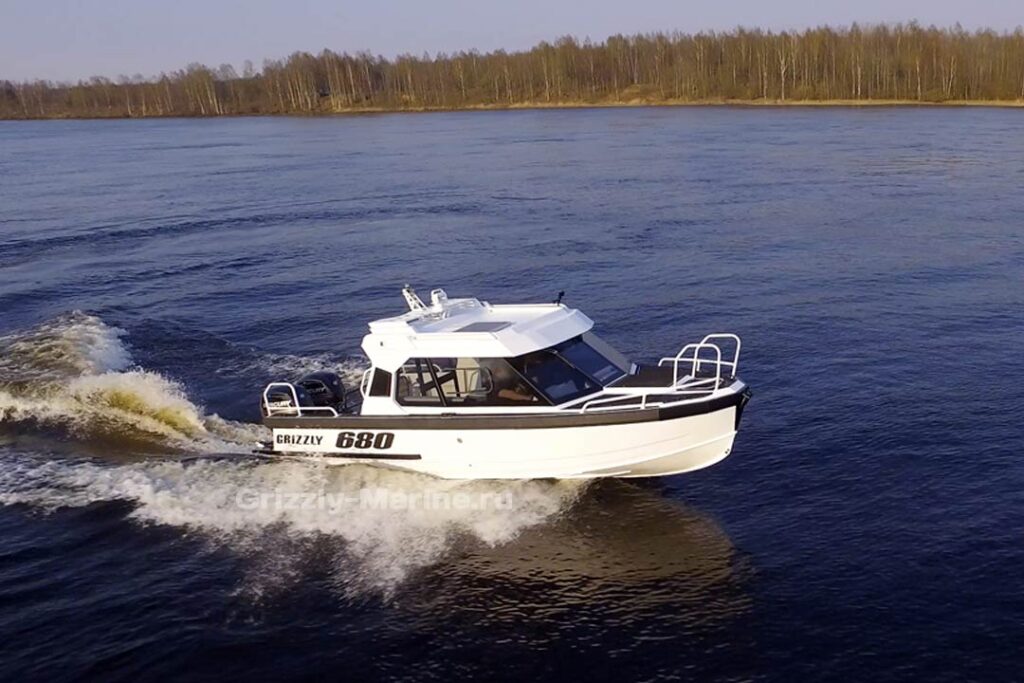 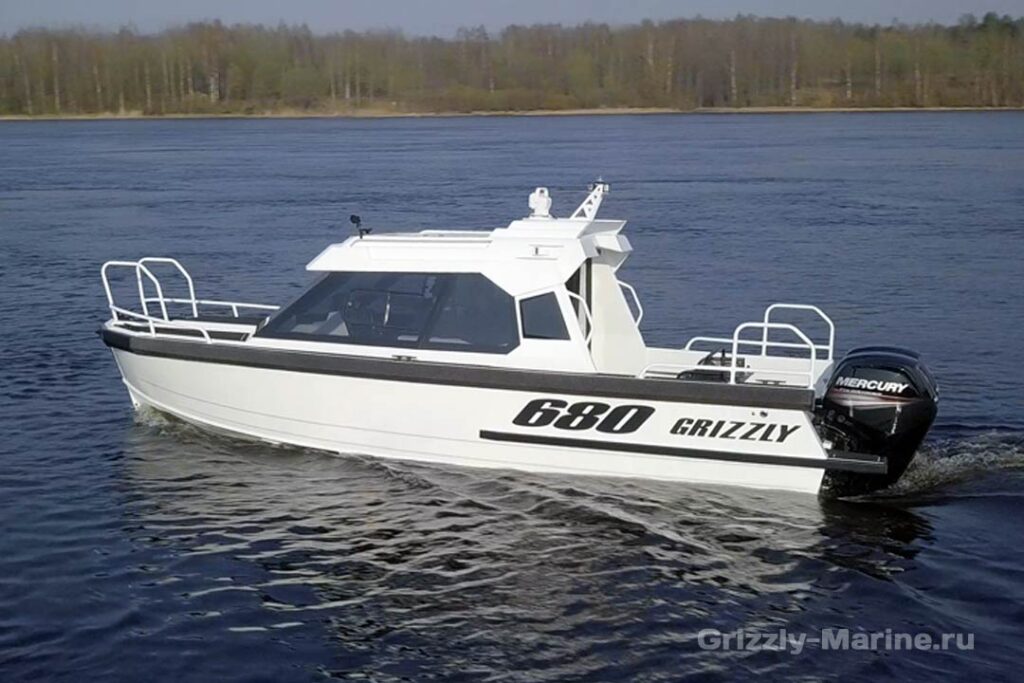 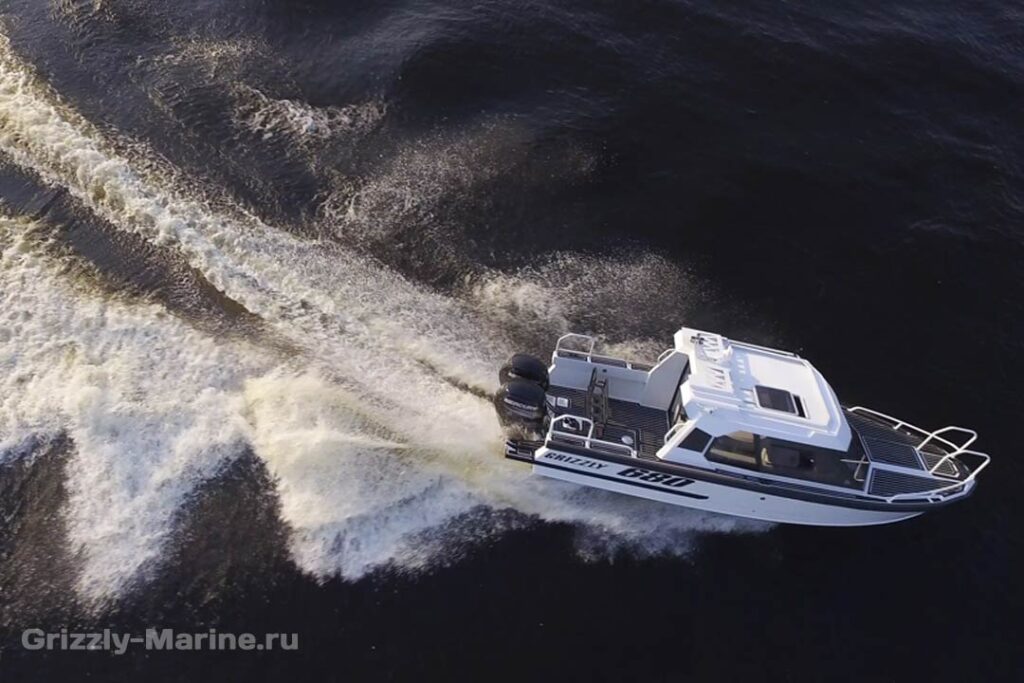 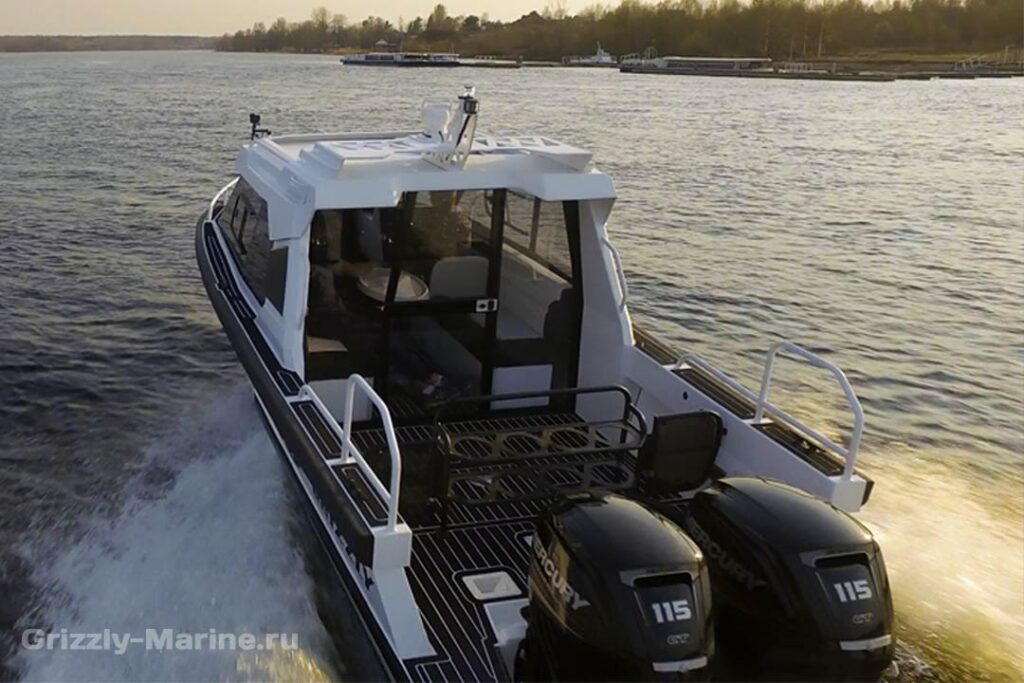 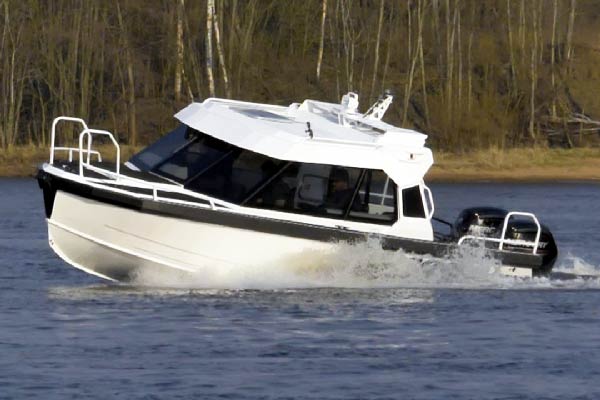 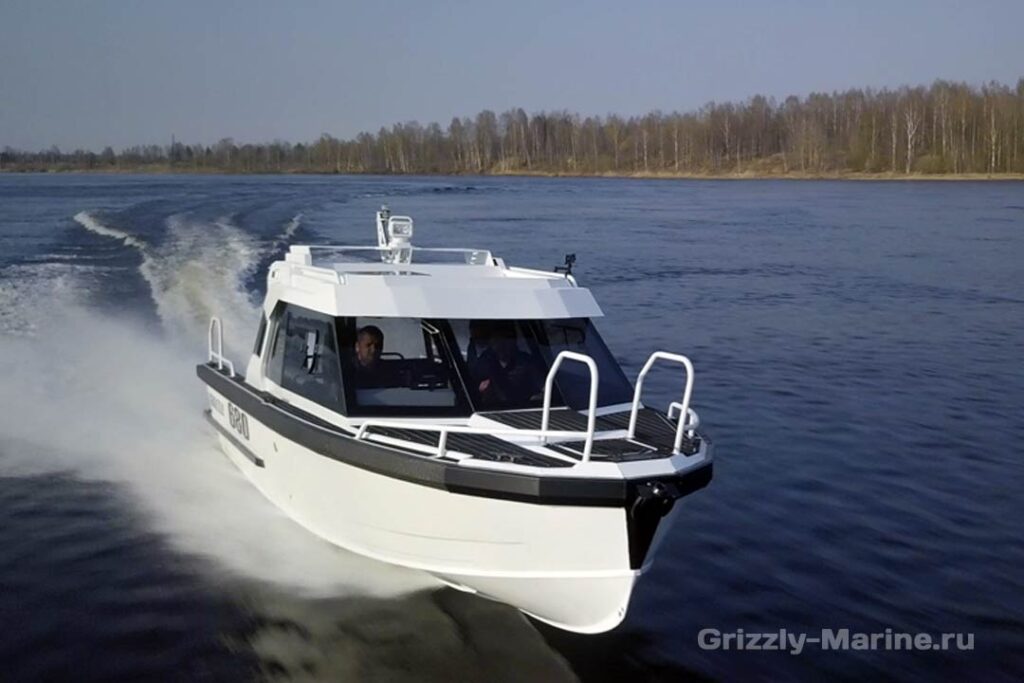 View all
View all 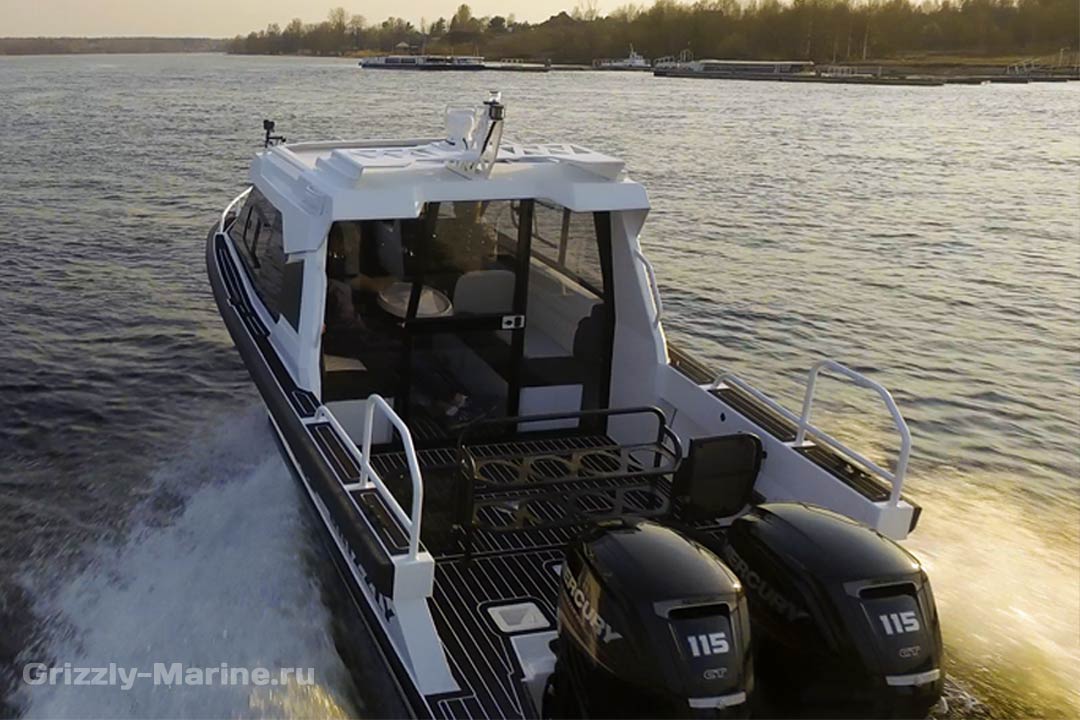 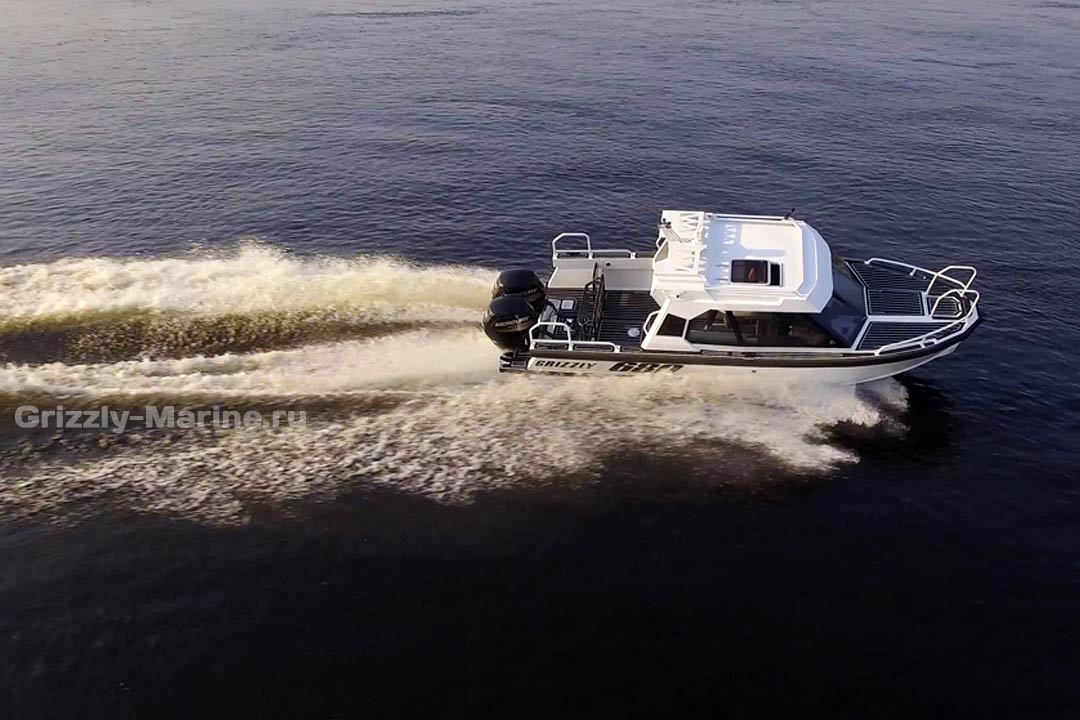 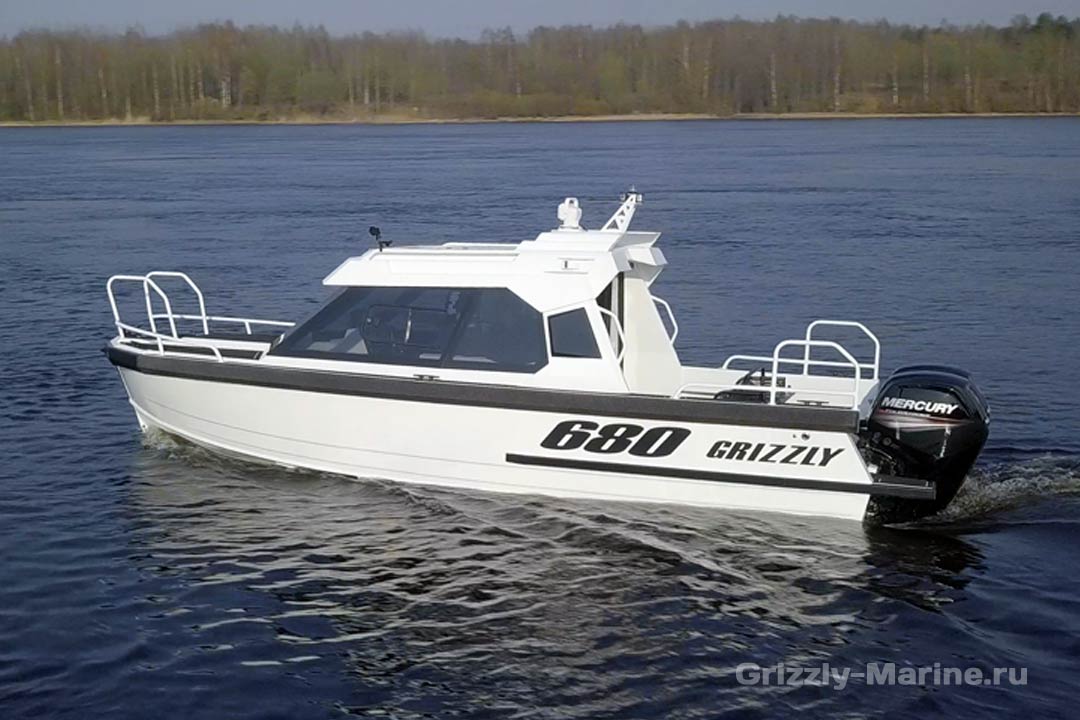 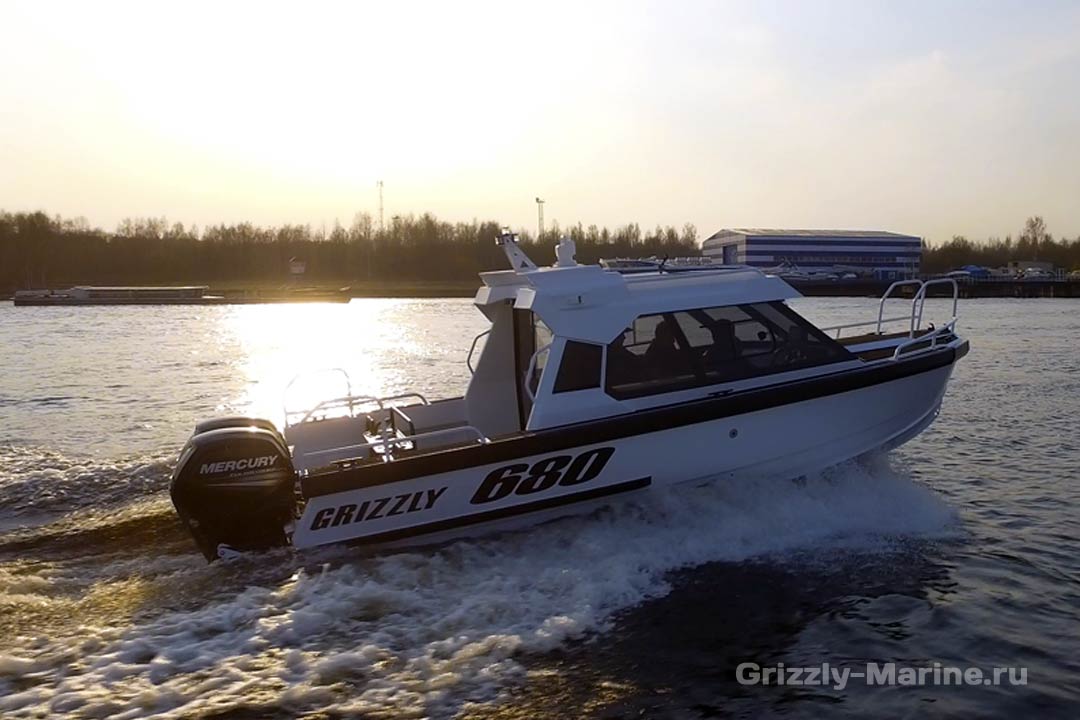 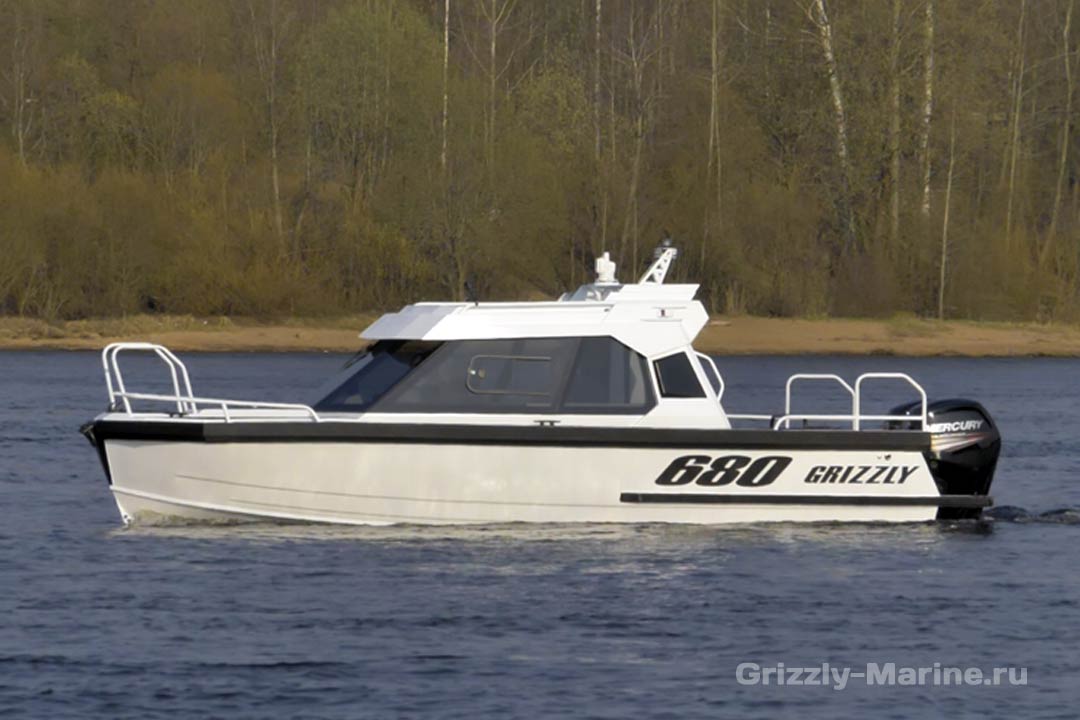 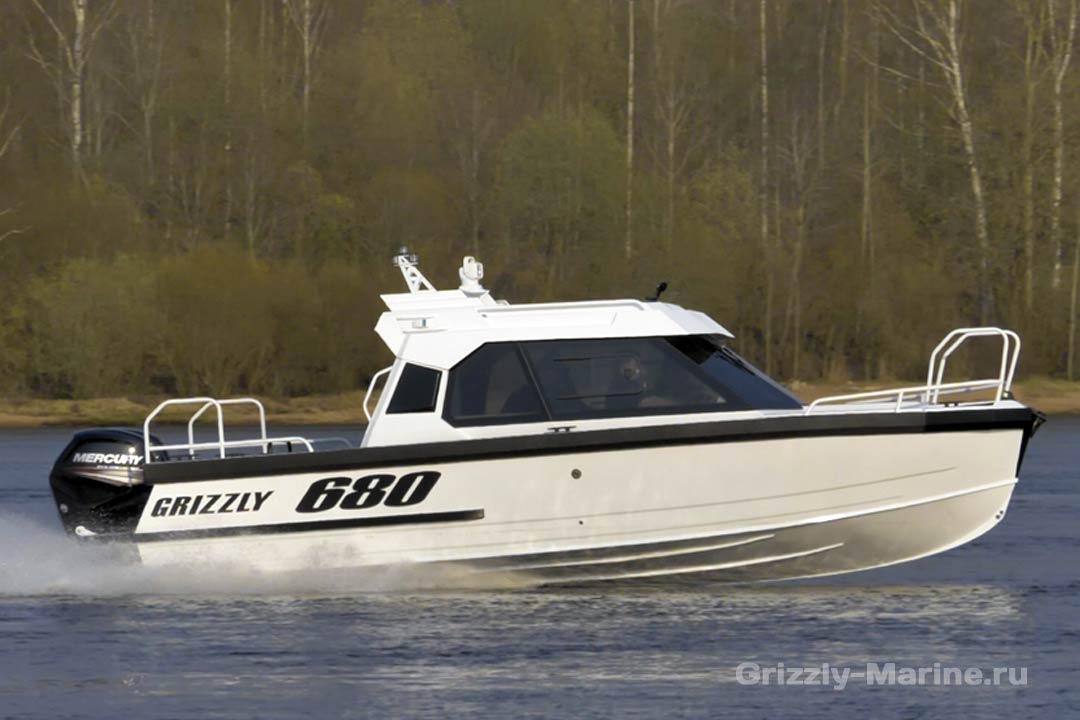 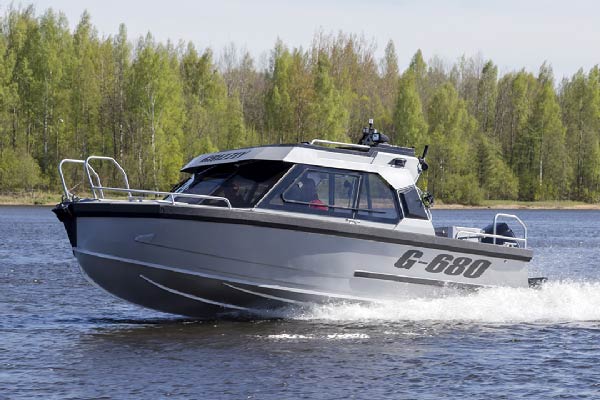 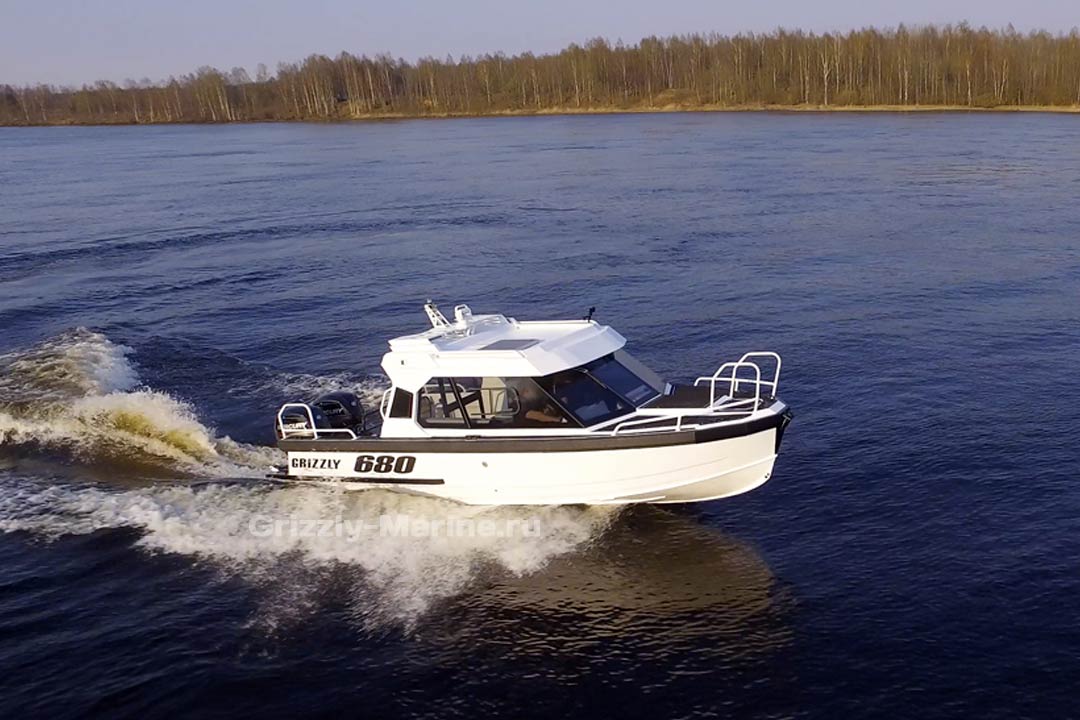 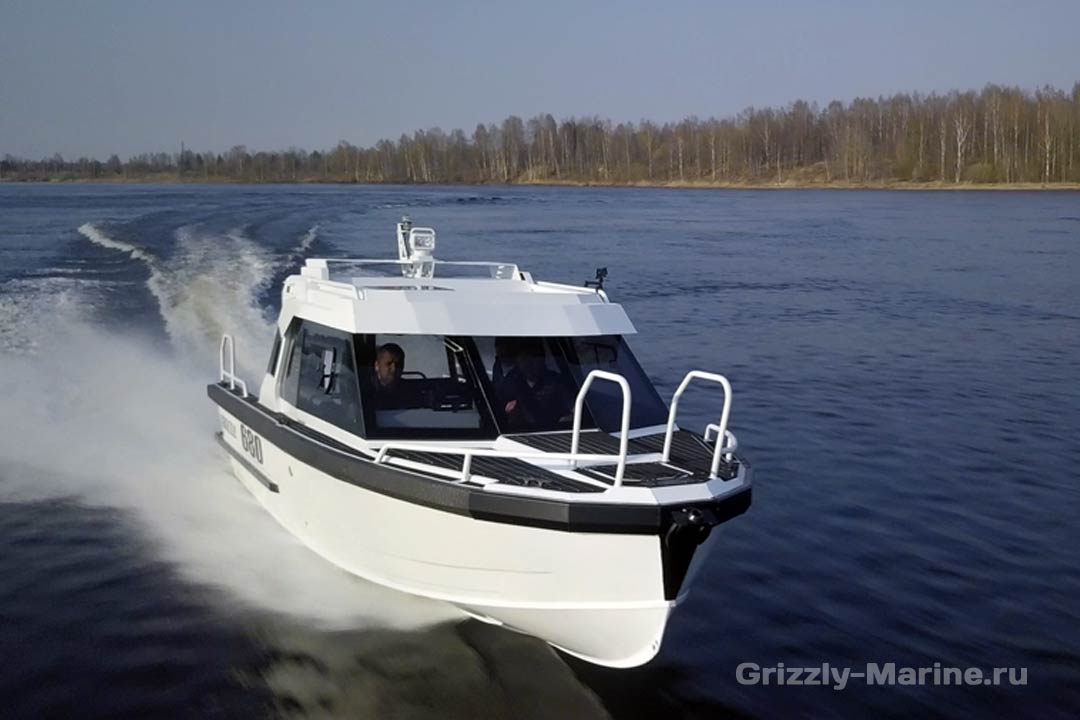 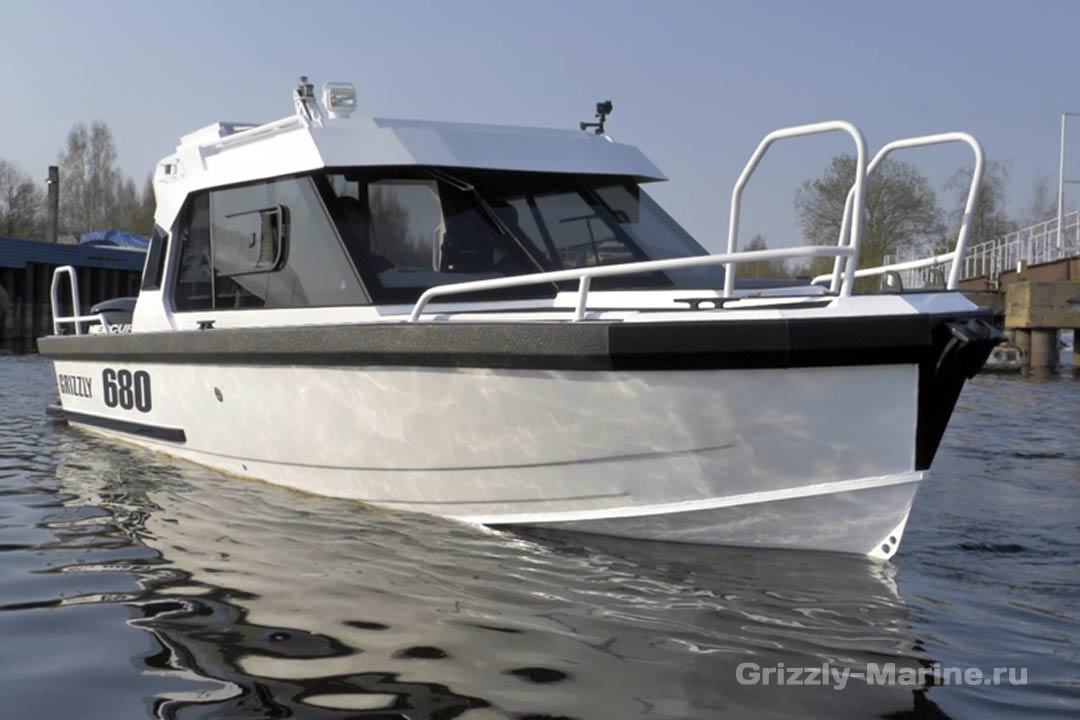 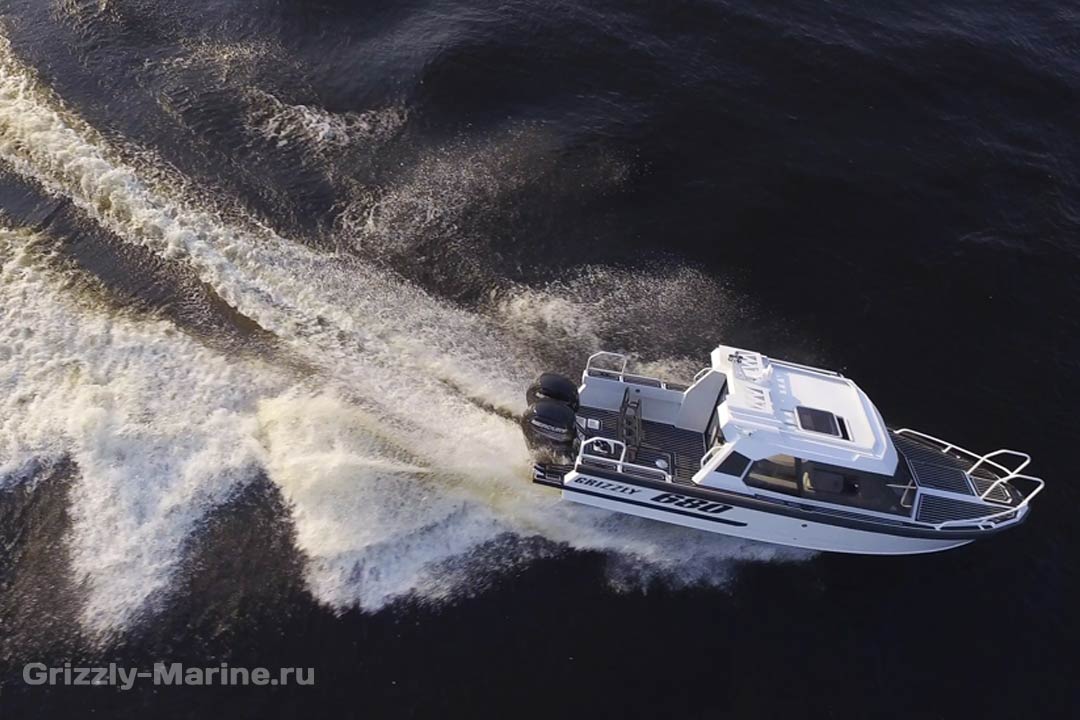 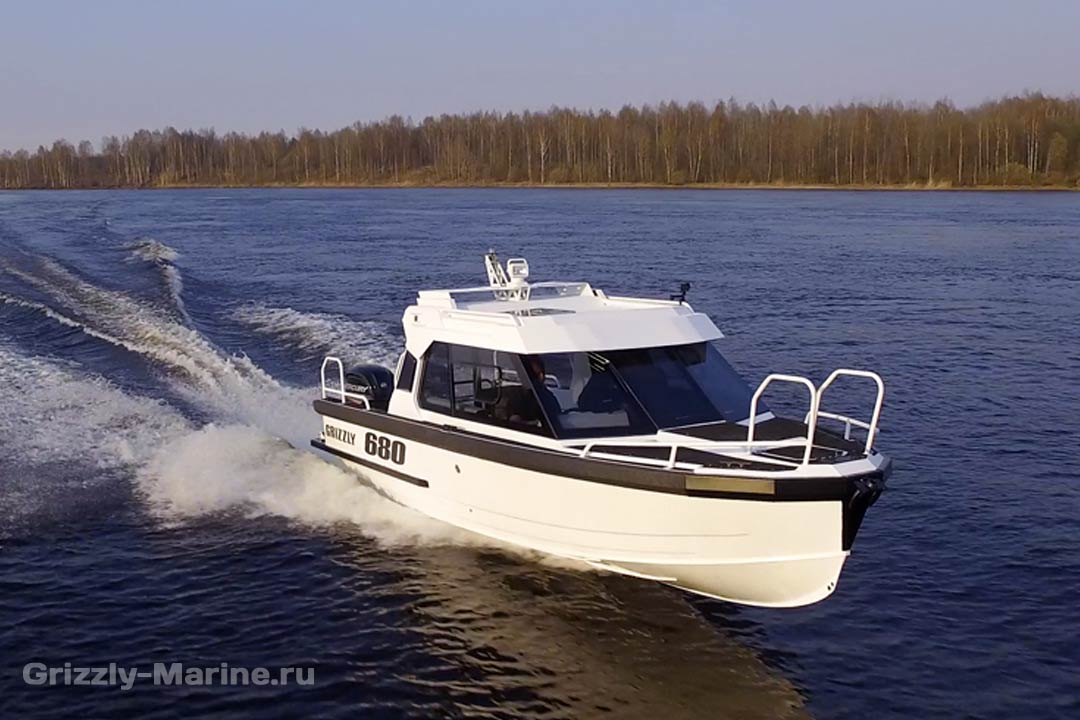 Comfort and versatility are very important to many boat owners today. By sacrificing the forward cockpit in the traditional layout of the PRO series boats, the result is a cozy and very comfortably habitable cabin, with the soft cushions provided on this model as standard, making for a comfortable sleeper that can accommodate two people. GRIZZLY G680 PRO TWIN Cruiser, having a cabin, has a wider range, on the duration of transitions and trips, the cabin gives the opportunity to spend the night in a boat not caring about finding a night shelter, which greatly increases the time spent on the boat and allows to operate it in the most severe conditions.
This boat, like all GRIZZLY yachts, will definitely stand out when moored in a marina or hauled on the trail. This is for a number of reasons, on the one hand the emphasis on contemporary style and fashion, but more on structural features – painting, modern shapes and a recognizable elongated bow.
A particular detail on the exterior of the hull is similar to the model: the structural bow for the bulkhead. Its external part is covered by a special material – Line-X. It is widely used in the tuning of large four-wheel-drive vehicles and large pickups. Creating a special style, but first of all with special structural properties: increased resistance to abrasion and damage. This is used in the gunwale design, where it is particularly valuable. After all, the classic coating – rubber – tends to quickly become damaged, obsolete, losing its original appearance. The structure of the foresail beam, thanks to its greater thickness, protrudes a little beyond the hull boundaries and performs the function of a spray arrester. This is also unique for a boat of this class. Moreover, such form increases the area of the fenders, which makes it more convenient and safe to sail along the side. Convenient, sturdy grab rails around the perimeter of the entire hull further enhance this. They also offer additional functionality, enabling you to not simply hold on to the boat while moving around, but also to use it to secure loads. And in the upper part of the deckhouse, they serve as additional protection for the navigation lights. This is very important when mooring at a high mooring wall or ‘locking’, as it will prevent the lights from being damaged in the event of strong rocking.
If, however, you are mooring to a low mooring wall or an inferior boat, an additional, lower fender is fitted to the hull.

The boat has a twin outboard installed on the transom and this is one of the main features of this model, which also reveals the presence of the word twin, in the boat’s name. Which means twin propulsion system. With more and more boats being fitted with twin engines, the trend for monopropulsion is gradually fading away, due to a variety of objective reasons. Because a boat with a so called “twin engine” has a lot more manoeuvrability, minimum speed available (this is especially important while fishing or mooring in the marina), the ability to turn while staying in place, more confident handling, not prone to lateral swaying while in motion. Thanks to the two pivot points of the propellers of the engines, twin and mono arrangement can be compared to car and motorbike riding. The difference is that a twin unit gives you the manoeuvrability advantage. What’s more, such a setup is also safer. On the one hand, the boat draught is reduced in comparison with a single-engine setup. On the other hand, in case of failure of one of the engines, the second will ensure sufficient speed for return to a safe location. However, the price of such set is more advantageous than a set consisting of a total capacity engine with an auxiliary engine (dockage).
The aft part of the boat is divided into two spacious areas: the swimming platform and the aft cockpit. The swimming platform consists of two spacious crinolines which can be used not only for easy access to the engine, but also for fishing or for enjoying water activities. For the easiest and most comfortable boarding, a heavy duty crossover ladder has been incorporated into one of the crinolines. The cockpit itself is spacious enough.

For the fishermen’s convenience there are special lockers along each side where they can store their spinning rods. And above the cockpit you can place a targa for 8-10 spinnings, with glider reels for trolling. The boat concept is ideal for this style of fishing.
The cockpit door is made of durable acrylic. Unlike glass, this material is unbreakable, but also provides excellent visibility from the cockpit and the boat.